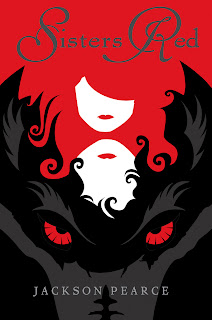 PEARCE, JACKSON
SISTERS RED
The wolf opens its long jaws, rows of teeth stretching for her. A thought locked itself in Scarlett's mind: I am the only one left to fight, so now I must kill you.
Scarlett March lives to hunt the Fenris -- the werewolves that took her eye when she was defending her sister, Rosie, from a brutal attack. Armed with a razor-sharp hatchet and a blood-red cloak, Scarlett is an expert at luring and slaying the wolves. She's determined to protect other young girls from a grisly death, and her raging heart will not rest until every single wolf is dead.
Rosie March once felt that her bond with her sister was unbreakable. Owing Scarlett her life, Rosie hunts ferociously alongside her. But even as more girls' bodies pile up in the city and the Fenris seem to be gaining power, Rosie dreams of a life beyond the wolves. She finds herself drawn to Scarlett's only friend, Silas, a young woodsman who is deadly with an ax. But does loving him mean betraying her sister and all that they've worked for?
THIS STUNNING TAKE ON RED RIDING HOOD IS AN INCREDIBLY GRIPPING READ, BUT BEWARE -- YOU WON'T WANT TO STOP ONCE YOU'VE STARTED. PEARCE KNOWS HOW TO BUILD TENSION WITH A TIGHT PLOT AND PLENTY OF ACTION. SISTERS RED IS VIOLENT AND PRETTY GRAPHIC IN PLACES (I FOUND MYSELF WINCING A TIME OR TWO) BUT IT ISN'T OVERLY DONE.
HOWEVER, THIS BOOK ISN'T ALL ABOUT FIGHTING WEREWOLVES. THERE IS A WONDERFUL ROMANCE WOVEN INTO THE PAGES AS WELL. PEARCE DOES A GOOD JOB OF CONVEYING THE EXCITEMENT, NERVES AND WONDER OF A NEW LOVE. THE ROMANCE BOTH SOFTENS AND INTENSIFIES THE TALE, ADDING AN ENTIRELY NEW DIMENSION.
EACH CHAPTER ALTERNATES POV BETWEEN THE SISTERS -- A GREAT TECHNIQUE TO DEVELOP CHARACTERIZATION AND IT DEFINITELY BUILDS SUSPENSE IN THE PLOT. BOTH SISTERS ARE BOUND TOGETHER BY A PAST TRAGEDY. THEIR DESIRE TO RIGHT THAT WRONG IS WHAT LEADS THEM TO HUNT AND KILL THE FENRIS. BUT IT IS THE DEPTH OF THAT DESIRE IN ONE OF THE SISTERS THAT NEARLY SEVERS THEIR RELATIONSHIP.
PEARCE HAS BUILT A VERY CLEVER LEGEND OF HER OWN AROUND THIS FAMILIAR FAIRY TALE AND HAS ARTFULLY PLACED IT INTO A MODERN SETTING. SHE CREATES IMAGERY WITH HER WORDS AND CUTTING DIALOGUE. CHARLES PERRAULT WOULD BE PROUD.
NOTE: SOME OFFENSIVE LANGUAGE
Posted by Kav at 9:07 AM